The 5 main islands of Japan

Hokkaidō is divided along a line extending roughly from Cape Sōya to Cape Erimo.
The eastern half includes the Daisetsu Mountains, at the foot of which lie the Tokachi and Konsen plains. The western half of Hokkaidō is less mountainous, and has a milder climate.
Long looked upon as a remote frontier island, Hokkaidō was fully annexed by Japan in 1869.

Honshū Island – 227,960 km2 in size (largest of the main islands), with roughly 104 million inhabitants. Honshū is the “main island” of Japan, not only the largest and most populous but also the centre of Japan’s economic and political power.

Most of the population is, however, concentrated on the “Pacific Belt”, a large megalopolis /conurbation running along the Pacific and inner sea, roughly from Tōkyō (Ibaraki) to the north of Kyūshū Island (Fukuoka).
The rest of Honshū island is much less densely populated, and mountainous.

The island of Honshū is located between those of Hokkaidō and Kyūshū, has a marked curve, south to southwest.

The northern region of Honshū is mainly rural, with mountains and alluvial plains and fishing areas on the coasts, on both the Sea of Japan and Pacific Ocean sides of the island.

At the centre of Honshū, we find the Tōkyō-Yokohama metropolis and the beginning of the Pacific Belt conurbation.

To the west, Honshū Island can be divided into three distinct districts: a coastal strip on the Sea of Japan with stormy winters and heavy snowfalls, the central highlands, including the Japanese Alps and a narrow corridor lying along the Pacific coast.

To the south, a narrow area stretches from the Sea of Japan on the north to the Pacific Ocean on the south, where the Pacific Belt Japan’s second-largest commercial-industrial complex, centred on Ōsaka and Kōbe, as well the two former imperial cities;a cultural centres of Nara and Kyōto.

Shikoku Island – 18,801 km2 in size (4th largest main island), with roughly 3.8 million inhabitants. Shikoku is a smaller, rural island running parallel to the southwest of the coast of western Honshū creates Japan’s inner sea, the Seto Inland Sea.
Mountains divide the island into two distinct regions, the northern region on the Inland sea, where most of the population lives, and a southern part on the Pacific Ocean, which is mountainous and sparsely populated, and still has fishing as its major economic activity.

Kyūshū Island – 36,782 km2 in size (3rd largest), with roughly 14.3 million inhabitants.
Kyūshū is a highly volcanic island which has played an important role as the gateway to Japan, due to its location, the closest to the Korean peninsula.
It is a mountainous island, with high tectonic activity, divided in two by Kyūshū Mountains, which run diagonally across the middle of the island.
The northern section, which constitutes the end of the Pacific Belt, is one of Japan’s most industrialised regions.

The three main islands of Honshū, Shikoku and Kyūshū form a natural entity, separated only by narrow straits and the Seto Inland Sea.

Okinawa Island – with only 1,199 km2 in size (smallest main island), with a population of roughly 1.3 million inhabitants, Okinawa Hontō (lit. main island ) is indeed the largest island of the Nansei/Ryū-Kyū archipelago, but also the smallest of the main Japanese islands.

In addition to these 5 main islands, 2 important island chains expand Japanese national waters, and are also both major diving destinations: the Nanpō Islands and the Nansei Islands.

The furthest islands, the Okinotorishima islet and the Minami-Torishima island expand Japan’s Exclusive Economic Zone in the Pacific Ocean.

All the Nanpō islands are all administered by the Tōkyō Metropolis, and as such are sometimes called Tōkyō Islands, and the archipelago’s main inhabited islands have been given the name “Tokyo Eleven Islands” in recent tourism-oriented material.

Through their remoteness and the various roles they played throughout history, the Nanpō islands display very specific cultural traits, and all have very interesting, often complex histories.
Hachijō-jima, for instance, located roughly 300 km off Tōkyō, served as a place for political exiles, and has also recently gained attention for its special language, with is potentially, with the existing Ryū-Kyū languages, the only known other example of a sister language related to Japanese through a common Japonic ancestor, but having separated before the constitution of old Japanese…).

Through their remoteness and location, the Nanpō islands also offer unique diving environments, not encountered elsewhere throughout the archipelago.

The Ogasawara islands (also known as Bonin Islands), which today are still only reachable by a 25-hour+ ferry ride from Tōkyō, were first used as whaling ports by foreign vessels, with small British then North-American run colonies (“Colony of Peel Island“) briefly established on Chichi-jima, before the island group was fully claimed by Japan in 1875, with settlers sent in from Hachijō-jima in the Izu islands.
Islanders of non-Japanese ancestry were given the Japanese nationality in 1882.

Historical population movements created strong links with Hawaii and the South-Pacific islands (from which many non-Japanese inhabitants came before the Japanese takeover), Hachijō and the Izu islands, followed by the Ryū-Kyū islands.
To this day, the Ogasawara/Bonin islands probably constitute some of the most remote areas in Japan, as they are only accessible by a 25-hour ferry ride, leaving weekly from Tōkyō.
There were some plans to build an airport, but these are currently on indefinite hold…

The Nanpō archipelago comprises the following groups of islands:

There are more than a dozen Izu islands and islets, out of which nine are currently inhabited, including the historical 7 main islands, Izu Shichitō (伊豆七島, or Seven Islands of Izu):

The two other inhabited Izu islands are:

Starting off the tip of south-Kyūshū (Kagoshima bay), the Nansei chain is formed by the Ōsumi, Tokara and Amami islands groups.
These islands, known as the Satsunan Islands, are all administrated by Kagoshima prefecture.
The word Satsunan itself comes a contraction of the phrase Satsuma no Kuni no Nan (薩摩国の南), which translates as South of Satsuma Province, which was the name given to the old Japanese province that is now the western half of Kagoshima Prefecture

The arc then continues with the Okinawa islands, including the main island of Okinawa, which is also a prefecture governing over the non-Kyūshū administered part of the archipelago.

Crossing the Miyako Strait, the chain then reaches the Sakishima Islands, which can be further divided into the Miyako and Yaeyama Islands, of which Yonaguni island is the westernmost.

The term Sakishima Shotō (先島諸島) is a reference to the remoteness of the islands, which are beyond the Kerama Gap / Miyako strait, which is the largest strait (250km wide) in the Nansei islands, separating the Kerama and Miyako Islands.

The Nansei archipelago comprises the following groups of islands:

From Kagoshima to the main island of Okinawa, all the islands of the Nansei chain are closely connected, staying in physical view of one another, and form a clear geographical and cultural continuum.

There is, however, a much larger physical distance (known as the Kerama Gap) between the islands of Okinawa (Kerama) and the first island of the Sakishima group (Miyako), which also accounts for some marked cultural/linguistic differences.

And yet the Nansei archipelago forms a clear continuum, with its own culture and actual languages (that separated from a common Japonic trunk before the constitution of old Japanese, as opposed to other existing dialects of Japanese), as well as a rich and complex political history.
The islands once formed a distinct political entity, the Ryū-Kyū Kindgdom, which was split between Chinese and Japanese / Kyūshū (Satsuma domain) influence.

The islands that formed the Ryū-Kyū Kindgdom were fully annexed by Japan in 1879, abolishing the last branch of the Ryū-Kyū kingdom’s monarchy.

After World War II, the islands were placed under direct control of the USA, which lasted longer than in the rest of Japan, where direct rule ended in 1952.
The Ryū-Kyū remained under US control until May 1972, when the islands were fully reverted to Japan.
And today, the United States military still controls about 19% of the territory, especially on the main island of Okinawa, where large US military bases concentrate more than 30,000 North-American servicemen.

Historically, the Nansei islands covered the same identical territory as the Ryū-Kyū Archipelago, or Ryū-Kyū Arc the islands forming a continuum from Kagoshima Prefecture’s Ōsumi islands to Okinawa Prefecture’s Yaeyama islands; a widely accepted definition, validated by authoritative Japanese dictionaries like the Kōjien. 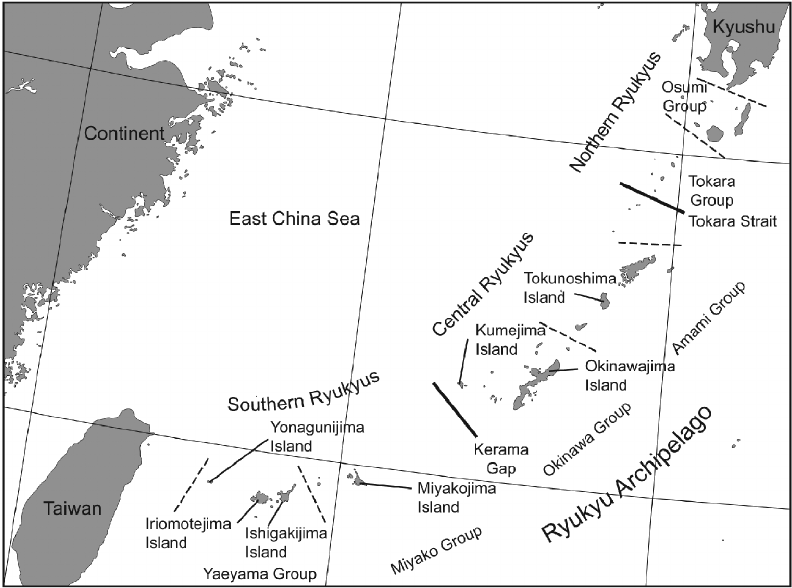 However, on May 26 2011, the Japanese national committee on the unification of geographical names ruled that the term Ryū-Kyū would, from then on, be officially reserved to islands attached to Okinawa prefecture with the exception of the Daitō Islands (i.e. primarily the Okinawa, Miyako and Yaeyama Islands), and therefore excluding the northern islands of the chain attached to Kyūshū’s Kagoshima prefecture, giving the term a now very different official and administrative definition.

The committee’s decision has a complex historical/political background, which does not reflect the cultural or physical reality of the archipelago (the major gap being, as previously mentioned, the Kerama Gap between the Okinawa islands and the Sakishima islands.

To make things more complicated, the islands of the Nansei archipelago, including all the islands administered by both the Kagoshima and Okinawa Prefectures, are grouped into a single adminstrative regional unit, the Kyūshū-Okinawa region.

Our use of the term Ryū-Kyū islands still mostly reflects the historical, and now non-official usage, synonymous of the term Nansei islands.

One thing is certain: the Nansei / Ryū-Kyū  archipelago offers Japan’s most “tropical” or southern-style, warm-water diving!

The 5 main islands of Japan include the following 8 regions, given from north to south:

Shikoku (along the southern coast of Honshū, creating the inner Seto Inland Sea)

Kyūshū and the Okinawa islands are regrouped in the same region, covering the main island of Kyūshū and the rest of the Nansei / Ryū-Kyū islands

The main island of Okinawa is a prefecture, but is itself is attached to the Kyūshū and Okinawa region, which encompasses the island of Kyūshū and all of the Nansei islands.

These 8 regions are further divided into 47 administrative units, the todōfuken, that include:
43 prefectures (県, ken) proper, two urban prefectures (府, fu, Ōsaka and Kyōto), one “territory” (道, dō, Hokkaido) and one “metropolis” (都, to, Tōkyō)