Japan is an island-country located in northeast Asia, at the eastern extremity of the Eurasian continent, along northeast Asia’s Pacific coast, north of the Philippines.

The islands of the Japanese archipelago, most of which are of stratovolcanic origins, separate the continent from the waters of the North-West Pacific Ocean, creating a marginal sea, the Sea of Japan (East Sea).
The islands of Japan stretch between the Sea of Okhotsk to the north and the East China Sea and Philippine Sea to the south.

Japan’s territory is made up of 6,852 islands, of which approximately 430 are inhabited.

Of these, 5 main islands (Hokkaidō, Honshū, Shikoku, Kyūshū and Okinawa Island) concentrate the bulk of its population and landmass, whereas the remaining 6,847 islands are smaller and mostly uninhabited. 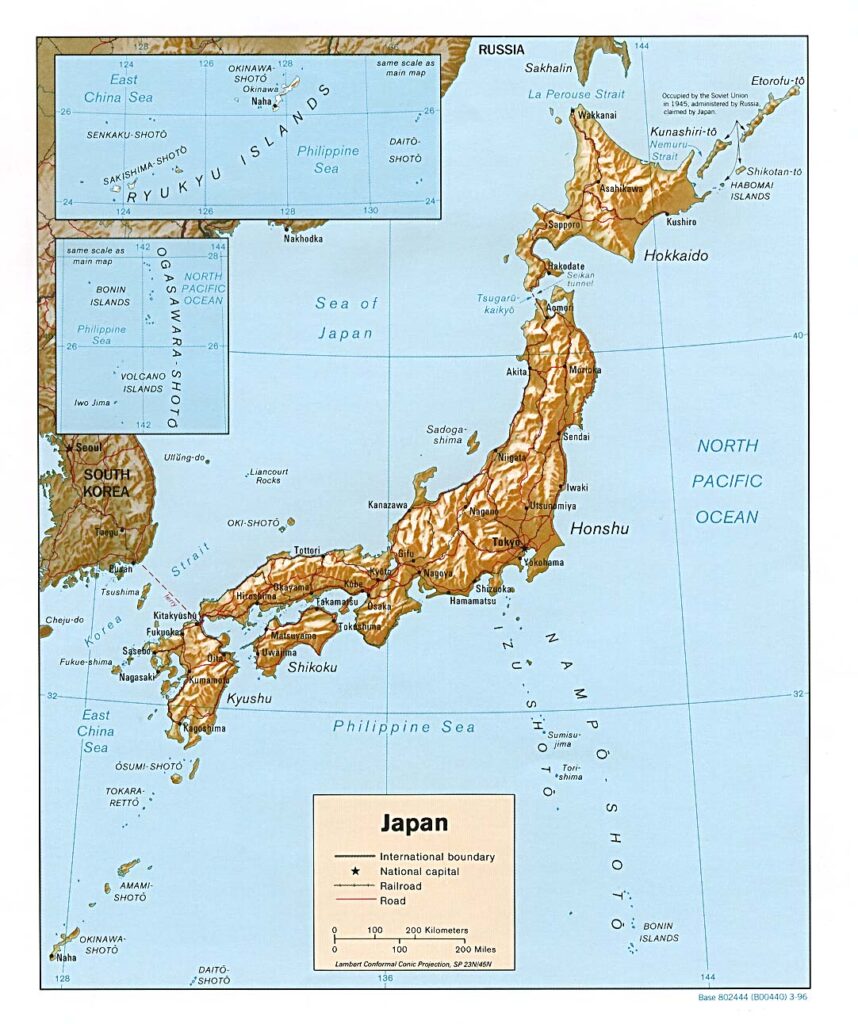 In addition to the 5 main islands, Japan has two major archipelagos:
the Nanpō Islands and the Nansei (Ryū-Kyū) Islands, island chains that extend respectively far to the south of the main Islands of Honshū, and to the southwest of the main island of Kyūshū.

Some of the largest other islands located near the main islands of Japan include the islands of Rishiri (near Hokkaidō), Sado and Oki (Sea of Japan, near Honshū), Awaji (Inner Sea, between Honshū and Shikoku), Tsushima, Gotō, and Amakusa Islands (near Kyūshū).

Please note some smaller islands/islets claimed by Japan, such as the Senkaku/Diaoyu Islands, the Northern Territories (Kuril islands) and the Liancourt Rocks, are subject to territorial disputes with China, Russia and South Korea respectively.

The Japanese archipelago is shaped like a long and narrow crescent, curving to the west over a length of roughly 3,000 km from north to south.

The north-to-southwardly arc created reaches from the subarctic latitudes of Sea of Okhotsk down to the subtropical latitudes of the Philippine Sea in the Pacific Ocean, yet all the Japanese islands are located in the northern hemisphere, firmly above the equatorial plane.

Japan’s highly distinctive crescent shape means that north and east and west and south are often mixed in Japanese place names, especially on the main islands, since the southern parts effectively stretch to the west, whereas the northern parts are effectively to the east).

The Japanese archipelago spans from approximately 46° north from to the northern tip of Hokkaidō, to 24° south at the Nansei islands’ most southern landmass, Yonaguni island (20° if we include the extreme southern latitude of the tiny Okinotorishima atoll in the Nanpō islands).

Looking more closely at the extreme points defining Japanese latitudes, the country reaches a northern latitude of 45°31′ N in the Cape Sōya / Bentenjima area, which is the most northern point on the island of Hokkaidō (there are other extreme points further north, but they are on islands currently subject to territorial disputes with the Russian Federation).

The 45° parallel north runs roughly near the towns of Grenoble in France, Turin in Italy in Europe or the New York /Quebec states border in the North America or Inner Mongolia in China.

In the southern latitudes, extreme points include, to the south-west, a latitude of 24°26’ reached at Cape Irizaki, at the western end of Yonaguni island, which is itself part of the Yaeyama Islands group, located at the far end of the Ryū-Kyū archipelago (Okinawa Prefecture).
This point is roughly 110 km from the island of Taiwan (which is visible from Yonaguni on a clear day).

The 24° parallel north runs roughly through Yunnan in China, Manipur in India, Oman, Egypt, or the Baja-California peninsula in Mexico.

Other extreme points are located on remote islands/islets in the Philippine Sea, including, at the southern end of the Nanpō archipelago, the Okinotorishima atoll (where 2 islets and a semi-articifial dry area serve as a research station on the reef) which is at an extreme southern latitude of 20°25’ north.

The 20° parallel north runs roughly through the town of Chiang Rai in Thailand, the Odisha State in India, Mexico or Quintana Roo States in Mexico, Cuba or Big Island in Hawaii.

For more information on Japan’s various extreme points and their status, see this entry.

This total territory is roughly equivalent to the combined areas of Germany and Switzerland, or the State of California in the USA.

Thanks to the remote outlying islands of the Nanpō and Nansei archipelagos, Japan has a large Exclusive Economic Zone, covering over 4,470,000 km2, which and is the 8th largest in the world.
Combined territorial waters and EEZ are about 4.48 million km2., covering 12 times the area of Japan’s landmass.

Japan’s Exclusive Economic Zone, which stretches from the baseline out to 200 nautical miles (370 km) from its coast, is more than 11 times the land area of the country.

All in all, Japanese territory represents a huge area, which roughly covers the Northern Hemisphere’s major fishing grounds, such as those between France’s Bay of Biscay to the Spanish Canary Islands, or the town of Seattle and mouth of the Columbia River and the tip of Mexico’s Baja California Peninsula.

The Japanese Ministry of Foreign Affairs has a Q&A page related to Japan’s territory and EEC, including info of territorial disputes, accessible here

On all of the major islands that make up the bulk of Japan’s landmass, the terrain is primarily mountainous, to the point that roughly 70% of Japan’s land area is made up of mountains that remain to this day largely covered by forests. Forests cover more than 25.12 million hectares, which is one of the largest forest coverage rates in the world (keeping in mind that Japanese forests have, for the most part, been subject to millenia of forestry activities).

These characteristics concentrate the archipelago’s population in lowland areas that exist mainly along the shore and are densely populated, especially along the Pacific coastal area (Pacific Belt, taiheyō beruto) of the main island of Honshū, a megalopolis which concentrates 81% of the country’s population.

Japan has a population of roughly 125.6 million people as of 2021, which makes it the 11th most populous country and also the second most populous island-country in the world, after Indonesia.

Japan’s geological position, at the meeting of major tectonic plates, accounts for the country’s mountainous, largely stratovolcanic topography, and its famous famous seismic and volcanic activity.
The main island of Honshū is itself at the intersection between the Eurasian, Philippine and North American tectonic plates.
Over 50 active volcanoes are constantly monitored by the Japan Meteorological Agency.

As an island-country with long and narrow landmass, no point anywhere in Japan is more than 150 kilometres from the sea, which means that maritime resources (and, for our more leisurely purposes, diving opportunities!), are accessible from almost everywhere in the archipelago, especially more so since modern transportation networks overcame the physical isolation of the country’s less accessible mountainous areas. 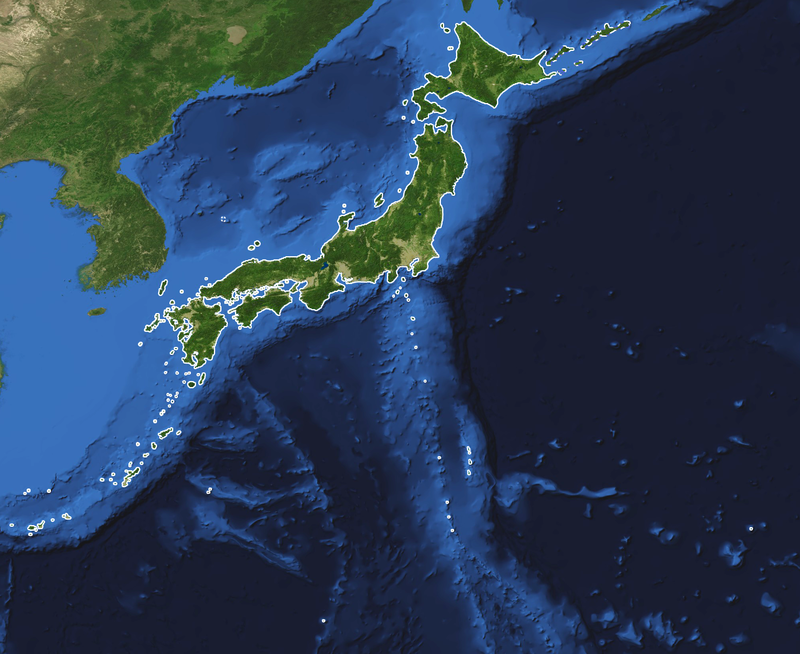 The coastline of Hokkaidō Island a rough diamond-like shape, with the four capes forming its corners.

Honshū Island features large indentations along its Pacific coast, such as the Bōsō, Izu, and Kii peninsulas, and with flat shores are the head of the large bays where the major cities are located, such as Ishinomaki (Sendai), Tokyo and Ise (Nagoya).
North-eastern Honshū’s Sanriku coast is famous for its characteristic rias topography, with a multitude of coastal inlets.
In contrast, Honshū’s Sea of Japan shoreline has a much less indented profile, with the Noto Peninsula and the Wakasa Bay being clear exceptions to its long curves of flat shorelines.

The island of Shikoku is shaped somewhat like a violin, with a bay opening the Inland Sea to the north and the curves of Tosa Bay facing Pacific the south.

The island of Kyūshū presents deeply fragmented and fractured coasts to the south and west including Kagoshima Bay.

A constant of the Japanese main islands’ coastline is its complexity, due to its primarily of volcanic origins, and deep water troughs deriving from the position of landmasses in relation to the area’s tectonic plates. 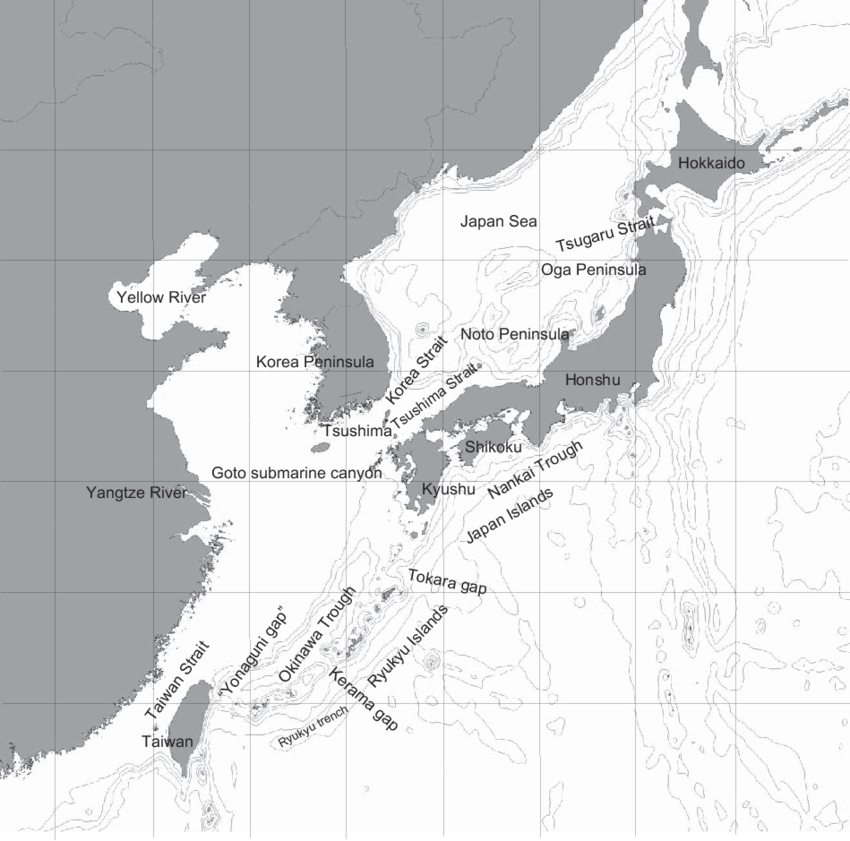 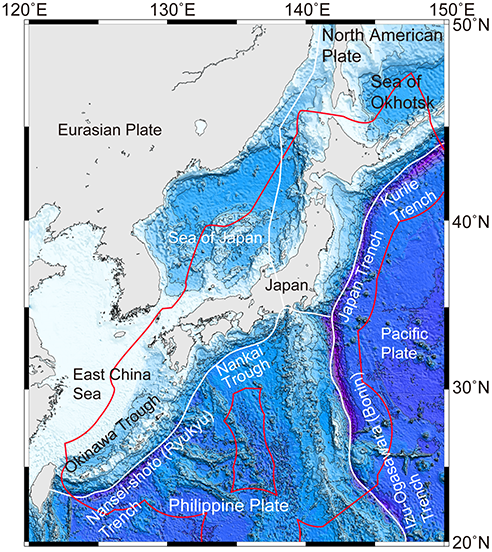 Because of this, the Japanese archipelago’s underwater topography is equally complex, with major deep water trenches guiding the major currents flowing around the archipelago.

Japan’s underwater topography plays a key role in the creation of coastal upwellings, currents of deep, cold water heading to the surface, and bringing with them deep-water marine life rarely seen elsewhere. 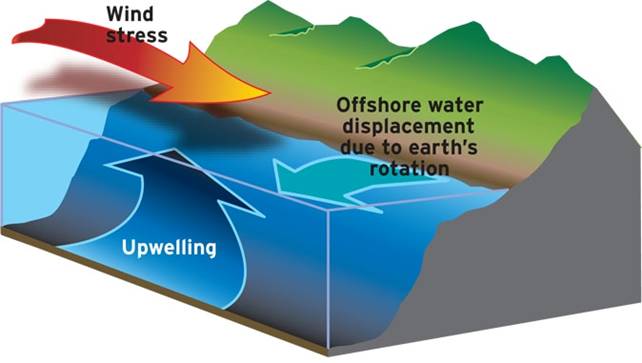 Due to the major role played by the seas in the Japanese archipelago, Japanese coastlines have always been the more densely populated, economical-active areas of the archipelago (Japan’s major cities are located by bays for the most part, along the Pacific coast of Honshū, the Pacific Belt).

And as such, have for centuries been subject to human intervention, and highly modified by projects such as land reclamation projects, port constructions, and seawall erection.

It is estimated that nearly 50 percent of Japan’s 34,000 kilometers coastline has been covered or somehow altered by tetrapods and other forms of concrete construction.

In modern-times, the concrete tetrapod-based seawall has become a ubiquitous sight on Japanese shores – let’s not forget Japan is stratovolcanic archipelago, lying at the boundary between the Eurasian, North American, and Pacific Tectonic Plates, meaning that earthquakes and volcanic seismic activity is common throughout the islands, and undersea earthquakes often expose the Japanese coastline to dangerous tidal waves, or tsunamis, as in 2011 for instance). 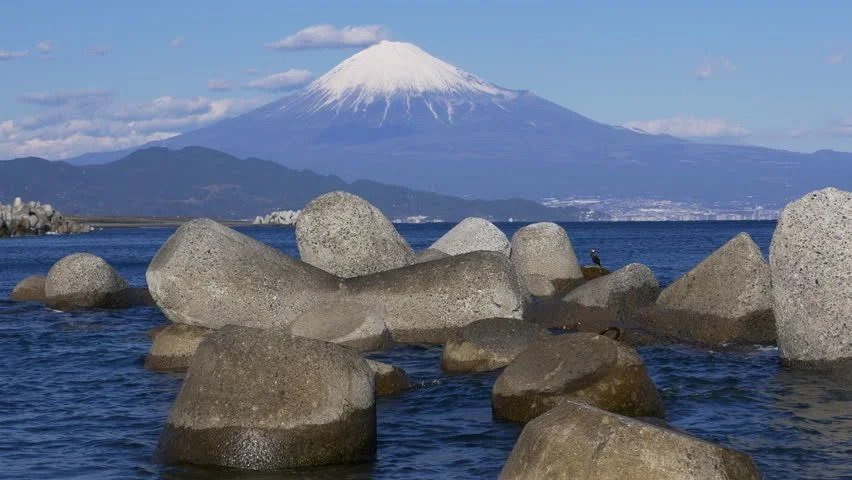